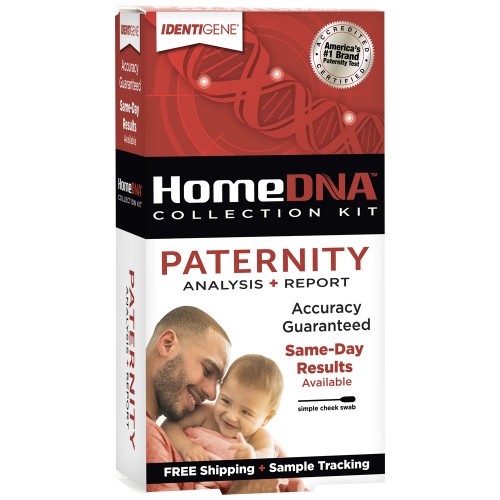 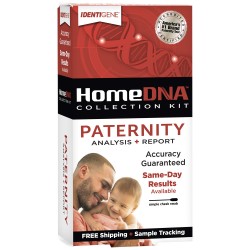 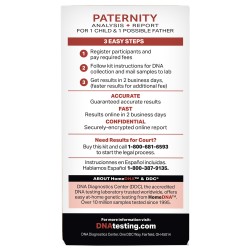 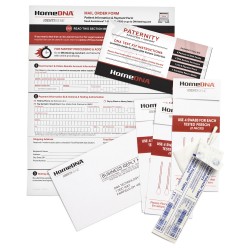 With  millions of satisfied customers, it's easy to see why the HomeDNA Paternity Test (formerly IDENTIGENE®) is America’s most trusted DNA test at pharmacy. Get the kit and see for yourself why more people choose us for paternity-testing services.

This kit is available to purchase only from retailers—either in-store or online. Click below to buy online from your favorite retailer, or stop in at a store near you.

HomeDNA Paternity, formerly IDENTIGENE®, is America’s #1 paternity test. This bestselling DNA test provides fast, accurate, and confidential paternity results in just one business day once samples arrive at our lab. HomeDNA is the affordable, trusted answer that you need, and it's easy!

This kit is available to purchase only from retailers—either in-store or online. Click below to buy online from your favorite retailer, or stop in at a store near you.

1-day and same-day results are also available for an additional fee.

This item is NOT for New York Residents.

New York Residents: The New York State Department of Health (NYSDOH) requires a doctor (or lawyer) authorization and a witnessed collection (additional fees apply) for all in-state paternity tests. Paternity testing at home is not allowed.

The Science Behind the Test

Genetic scientists and technicians use many methods to extract DNA from cells. All methods use three basic steps:

The extraction robot uses more chemicals to transfer the DNA mixture to tiny silica-based nano-beads (one billionth of a meter in size); the DNA sticks to the beads while the other cell parts are washed away.

The final step, the elution step, removes the DNA from the beads. The robot collects the pure DNA, which is now ready for the next step in the paternity testing process.

The DNA scientist puts the extracted DNA into a special solution containing primers. Like toner in a biological copy machine, primers find and make copies of the DNA sample-just those specific regions that we need for a paternity test.

The copy process begins by separating the double-stranded DNA-simply by turning up the heat. As the solution cools, the primers bind to single-stranded DNA, making two copies of the original. We repeat this process (heating and cooling the DNA and the primers) 28 times, making millions of copies of tiny DNA fragments that can now be detected and viewed by a special machine called a genetic analyzer.

The complete PCR process makes copies of 16-18 Genetic Systems (sometimes called markers or loci) to make one DNA Profile: 15-17 markers useful for paternity and one (1) gender marker (used for test-participant verification). Each individual person has different sizes or lengths of DNA fragments at each Genetic System. Special software measures the different sizes of the DNA sections, represented by two numbers (alleles) at each Genetic System on your paternity test report. We then use this information to answer your paternity question.

A child’s DNA Profile is always a combination of half the father’s markers and half the mother’s markers. If the tested (possible) father does not share matching markers with the child, then the tested man is excluded as the biological father (he is not the father). If the DNA Profiles do match, the father is not excluded (he is the father) and the probability of paternity is reported (typically greater than 99.99%).

5 Easy Steps to Get your HomeDNA Paternity Analysis + Report

Mailing time: If using the postage-paid envelope included in the kit, please allow 7-10 business days for samples to arrive at the lab. For faster mailing time, you're welcome to send samples via first-class mail or courier service.

If you need results for court: Results from testing using this at-home kit are not court-admissible. If you need testing for legal reasons, do not open the kit, and please contact us directly at 800-344-9583.

How do I use the paternity-test kit?

How do I collect DNA samples for paternity testing?

Collect DNA samples by rubbing swabs on the inside of the cheek to gather cells. Cheek swabs are convenient and safe for participants of any age, including infants. Each participant should use three swabs and place them in the corresponding sample envelope provided.

What do I do with the DNA samples once they’re collected?

Once each participant's DNA is collected, send your samples and order form (if you did not use online test setup) to the lab using the prepaid envelope included, your own envelope or an express courier like FedEx.

If you are testing for legal purposes, such as child support, child custody, immigration, or estate planning, you definitely need a court-admissible test. Courts will not accept test-results where DNA was collected at home because the identity of the participants cannot be verified. If you think you may ever need results for legal reasons (even if you may not right now), then it may be a better choice than at-home testing.

Give us a call at 888-404-4363 to arrange for legal testing with court-admissible results.

Whether for legal or personal purposes, the DNA test results and testing are the same. When testing for legal reasons, a third-party must witness the DNA collection process and verify the identity of each person being tested. Purchasers of the DNA test kit sold at drug stores qualify for a discounted test price for legal purpose testing.

Learn more about legal paternity testing, or contact us for more help and information.

Please note that New York State requires all paternity testing to be authorized by a doctor or lawyer and collected by a disinterested third party. Thus, all New York State paternity cases meet the requirements for court-admissible testing.

How old must the child be?

There are no age restrictions for DNA test participants. When collection is performed by an adult as directed, the cheek swabs are even safe for infants.

When will my paternity results be ready?

Paternity test results usually take two (2) business days from the time that all samples arrive at the laboratory, as long as no recollection or additional testing is needed. If you chose 1-day or same-day results, your report will be posted accordingly. Other tests, like grandparent, sibling, or aunt/uncle tests, may take up to two (2) weeks.

If you included an email address on your paperwork, you will be notified once samples arrive at the lab. You will receive another notification once results are ready to view. Once the report has been posted, you can log in to view your results using the email address associated with the case or the case reference number and the password you selected for your case.

IMPORTANT: You cannot log in to your account until you are notified that your results are posted.

We have a special paternity test kit for New York State. New York has a different paternity-testing process than other states that requires a doctor or a lawyer to first authorize the DNA test. DNA collection and submission must then be supervised by an approved witness. Call us at 800-344-9583, Monday through Friday from 8:30a - 5:30a ET, with any questions or to assist in finding a doctor in your area. You can also visit our paternity testing for New York state residents page.

Why include the mother in a paternity test?

We strongly recommend including the biological mother in a paternity test because her participation can strengthen the paternity test result. Occasionally, the mother is needed to get a conclusive result and we may contact you to request the mother's DNA sample.

For detailed information, see Why Test The Mother?

What if the father isn’t available for a paternity test?

HomeDNA empowers you with valuable information contained in your own DNA. This targeted selection of easy, at-home genetic tests will help you make better health and wellness choices and provide important answers about family relationships both past and present. Brought to you by DNA Diagnostics Center (DDC), this innovative product line includes:

Established in 1995, DDC was founded on the belief that technological advancements in DNA testing should translate to services that are accessible and affordable to everyone. We have built an international reputation based on our commitment to reliability, innovation, and value by offering DNA testing services for paternity and other family relationships, forensics, animal breeders and veterinarians, and how wellness-inspired consumers. DDC's laboratory in Fairfield, Ohio is nationally and internationally recognized through multiple accreditations.

As an industry leader in DNA testing we offer:

For over 25 years, we have earned the trust of our customers by carefully handling more than 20 million DNA samples. Your sensitive DNA test results always remain confidential, and we will not sell your personal data to third parties. DDC is the DNA testing laboratory trusted around the world. 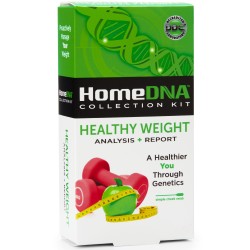 Unlock the secret to achieving a healthy weight today, using insights from your own genetic code. 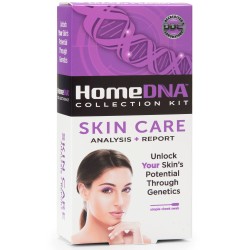 Take the guesswork out of buying beauty products and unlock your skin's full potential. 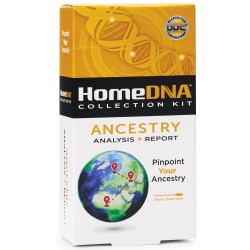 DNA ancestral analysis compares your past with your present. 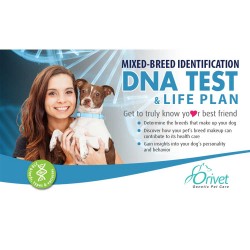 Learn about your mixed-breed dog's lineage and get a customized Life Plan for your pet.

You have qualified for a limited time special offer